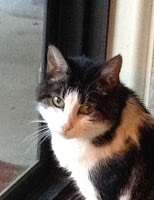 In between the PET scan on Friday, May 24, and my first scheduled chemo treatment on May 28, was a long, holiday weekend filled with apprehension, anxiety, and other distinctive emotions.  To further murky the waters, my beloved 22-year-old cat, Fluffy, wasn't her usual, active self.  She had been losing weight, throwing up, and frequently peeing. Don and I decided a visit to the vet was in order.


We loaded Fluffy up in the cat carrier that she loathes and traveled the one mile to the in midtown Dr. Marvin, who may be one of the most compassionate vets I have ever encountered, examined Fluffy Sue (a southern feline befitting a double name), and said she needed to be hydrated intravenously and kept overnight.  He explained that Fluffy was going into renal failure, common for cats her age. Well, isn’t that just dandy… from PET scan to pet emergency. Does anyone else see the irony here? We left her in the caring hands of Dr. Marvin.  I could feel my stress level accelerating.


During the weekend, I kept busy running errands, stocking my refrigerator with healthy edibles, and shopping for a few loose-fitting, “chemo” clothes. For those who know me, clothes are my vice (or one of them) and something I never really “need,” however, passing time at a meaningless task like shopping was therapeutic and helped pass the hours before T-day (treatment day).


After darting here and there, it was time for me to pick up Miss Fluffy from her overnight stay at the pet hospital. The clinic staff said she did well and had really perked up.  She looked thin but let me know in no uncertain terms that she didn't want a repeat experience at the vet clinic.  When I let her out of the cat carrier at my condo, she made a beeline for her food dish – a very good sign.


It didn't surprise me much when my older brother, Mike, phoned later that day and said he and my sister-in-law, Barb, wanted to be with me for the first treatment.  He has always been the “processor” in the family; the one who might take several days to make a decision, but it was usually the right one.  He needed to see first-hand how his baby sister was going to endure the chemotherapy.  I was actually thankful for his phone call and anxious for their visit.  While Don has been my shoulder to lean on, as well as my confidant and the love of my life, my siblings and other immediate family members are the glue that keeps all the moving parts of this challenge in check. We agreed that they would meet Don and me at my condo Tuesday morning shortly before I had to report to UAMS for my oncology appointment with Dr. Makhoul and the anticipated chemo treatment.


More busy-work and a few social outings occupied my time (and mind) on Sunday. Don and I enjoyed brunch and a movie, Mud, starring Matthew McConaughey.  The movie was filmed in southeast and was on my “must see” list.  It was a good movie and one in which McConaughey should probably receive peer recognition during the awards season.  (What’s a proud Arkansan supposed to say about a movie shot on location in her native state that stars a hunk?)


When Don and I arrived home after the movie, I was anxious to see how Miss Fluffy was fairing.  I was stunned that she had been throwing up all afternoon and was very weak.  I felt guilty that I wasn't in the house when she became so ill.  Like any mother of a sick child, I cleaned up the vomit and cried while doing it. My baby girl was really ailing and I was going to have to deal with the inevitable.  I managed to get her to drink water and even hand fed her a little food.  Eventually, the vomiting stopped.


Dr. Marvin had graciously provided his cell number to text him if something happened with Fluffy over the weekend.  I did just that – texted him.  He said if the vomiting had stopped, just to keep her hydrated. Bless her little heart; she retreated to her “hidey-hole” in my clothes closet, where she stayed for the rest of the day.


Early Monday morning, Memorial Day, I was awakened to a slight purr and a fuzzy nuzzling at my neck.  My girl had made her way out of the closet and onto my bed.  I turned on the bedside light and we talked.  I asked her if she was hungry and she tried to respond but couldn't hold her head up.  I panicked and immediately called Don, who was at home in for a little reprieve from his “patient.”  He quickly became the medical professional and explained that she was failing and I needed to think about what was best for her.  Damn him!  That’s not what I wanted to hear.  Yet, I knew he loved Fluffy, too, and could see and articulate what I refused to accept.  But, I wasn't giving up.


I placed Fluffy on the floor since she didn't have the energy to get down by herself and she wobbled her way to the kitchen with me.  I provided her with fresh water and decided that she could have whatever she wanted to eat, (if she could or would eat), and none of that boring, tasteless prescription cat food, either.  I went for the good stuff in my pantry– Starkist tuna.  I opened the can and put a small spoonful in her cat dish and preceded to hand feed her.  She responded and ate the entire dollop, then drank lots of water.  She retreated to the closet, where she stayed most of the morning.  Early afternoon, she slowly made her way out of her protected place to eat a little more, drink water and, this time, to watch the birds from the open, sliding-glass door.  It was apparent that I could learn something from my 22-year-old friend and companion and that was to never give up.


Fluffy continued to rally and slept next to me, purring throughout the night and until the sun peeked over the horizon of treatment day, May 28.

Thank you for commenting on my blog. I'm very busy now (as you might imagine), so please know that I will get to your comment as soon as I can.

Invasive Ductal Carcinoma: What is it?

Invasive ductal carcinoma (IDC) is the most common form of invasive breast cancer. It accounts for 80% of breast cancer incidence upon diagnosis, according to statistics from the U.S. in 2004. On a mammogram, it is usually visualized as a mass with fine spikes radiating from the edges. On physical examination, the lump usually feels much harder or firmer than benign breast lesions such as fibroadenoma. On microscopic examination, the cancerous cells invade and replace the surrounding normal tissues.
More on Wikipedia

Breast tissue is composed of fatty (nondense) tissue and connective (dense) tissue. Radiologists use a grading system to describe the density of breast tissue based on the proportion of fat to connective tissue. There are four levels of density that are detected by mammograms: Level 1 (a very fatty breast), level 2 (fatty tissue makes up more than 50 percent of breast), level 3 (dense tissue makes up more than 50 percent of the breast) and level 4 (a very dense breast with very little fat). Click the image above for more information from the Mayo Clinic.

Get a Breast Cancer Screening

Click map to find a screening site near you.